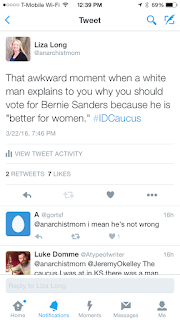 Sadly, I have to admit that as a woman, and an educated liberal, I do not find your arguments compelling. It feels like you're cherry picking your data (frankly I don't know if I believe your efforts to characterize other people are totally unbiased). And by the end of your letter you concede that you are, if we're being honest, making this choice not based on policies but on the candidate's gender. This is problematic because it is exactly what your reported "BernieBros" are doing.

If vocal minorities of people are hating on Hillary Clinton, that's not entirely concerning to me. There are vocal people on both sides, but being vocal often overshadows the actual proportion of these folks to rational people who don't wag their politics about (for whatever reason). I get it. I get both (all?) sides of it. People are varied in their feelings and their knowledge about politics, but that doesn't change that it affects all of us.

That's why it's important to stick to the policies and not the demographic data for a candidate.

Every vote for a man is gender politics. We expect politicians and other leaders to be men because that is who we primarily see in these roles. I'm tired of hearing the 'gender card' (you should look for best qualified rather than...) being played every time I express support for a woman candidate or state my opinion that if we want to bring about real equality in the USA then, as a country, we'll only nominate qualified women (and they are out there) to things like judgeships, corporate and nonprofit boards, etc so that the new normal represents the ratio of men/women in this country. Yes, a few years may be 'women only' but what is that after 200+ years of 'men only?'

As long as the default position for who gets picked or elected is a man, women will continue to be second class citizens. As feminists, as concerned citizens, do we have the will to change this?

One of Those White Males You Hate said...

Also, I wanted to respond to your son and let him know that they weren't alone, but that we were just in the other building. And then I realized that as much as I might like to believe it, we're no longer under 30. Ha! Can I get a "close enough"?

I had such an I'm not in Kansas anymore moment that I unsubscribed from your blog when I first read it. I go elsewhere to discuss politics. This is the only blog I felt addressed advocacy for our children who struggle with mental illness. I signed back up after taking a very deep breath I will not get into my own political views to back up my comment to surprise anyone. But I would advise you to continue what you set yourself to do and do so well.

Thank you for articulating so many of my thoughts and feelings. We share the experience of caregiver and I wish you the best. My younger son sounds much like yours, but older at 34. My lifelong roommate. My heart. My hero.

If Anger can be focused it CAn be very useful; I don't do well with anger it brings out all of my worst features. I practice radical acceptance and life goes much smoother for me.

I think Hillary is the best qualified presidential candidate ever. However, I voted Bernie because his policies are better for all of the addicts and mentally ill patients I treat everyday. Of course I will vote for Hillary in November as she has a virtual lock on the nomination and I do like her. However, should Kasich somehow win or Trump successfully uses his acting skills to morph into a liberal she is vulnerable.

But the chances are she will be the next president!

I came across this belatedly, but just wanted to say I appreciate your perspective, and agree with you wholeheartedly!