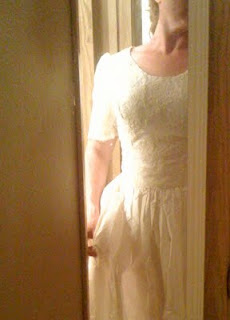 It’s wedding season. And I was not the only woman gawking, in that ironic but wistful manner only the sadder-but-wiser girl can convey, at the ridiculous but iconic costuming that is still, to this day, at the heart of every girl-turned-woman’s personal fairy tale.
“Isn’t that simply beautiful?” one woman sighed, turning to the rest of us as she reverently fingered the ivory silk charmeuse of one gown, retail price $850, Goodwill price a mere $45. It was, we agreed. Simply—minus the 423 buttons, the elaborate train, and the slip large enough to hide six or seven children—beautiful.
Actually, it was ridiculous. Let’s face it: wedding dresses are ugly. White is a bad color for just about every person on the planet. The implication behind the color—that the person wearing it has not had sex yet—is simply unrealistic in the age of on-demand birth control. And yet women everywhere spend months or years planning their big days, spending sums of money on a dress that could provide drinking water wells to third world villages, all in the name of an archaic ritual that has little meaning for the modern world.
(God bless gay marriage, by the way—maybe FINALLY someone will bring some taste and style to the costuming of this silly ritual).
But really, is there any article of clothing more tragic than a thrift store wedding dress? A wedding dress in a thrift store, by implication, is no longer a cherished thing. The story behind the dress is, implicitly and explicitly, we did not live happily ever after.
I did not live happily ever after. But when the sorting was done, and the boxes were packed, I couldn’t bring myself to toss the dress. I was not the sort of girl who gave much thought to my wedding day. I let my mother plan most of it. But I did know exactly what I wanted in a dress. I designed it myself, and my mother, a skilled seamstress, sewed it to my exact specifications and measurements. The dress was matte ivory silk (not white! Not that I couldn’t have worn white, symbolically speaking!), a bodice of the finest Venetian lace, sleeves and neckline trimmed with pearls.
I felt like a princess in that dress, on that day. It was the happiest day of my life. But 13 years later, we woke up to find that happily ever after was too much work for both of us.
I’ve almost reached what would have been my 16th wedding anniversary. On facebook, my friends are posting anniversary pictures of themselves in poofy white gowns, surrounded by their embarrassed children, standing beside their sheepishly grinning husbands.
I’ll never be able to post that picture. But I dug up the dress, tried it on, smiled to find that it still fit after four children and all those years.
Will I ever wear another off-white dress on a day of goofy rituals? I can’t say right now that I see the attraction to that particular fairy tale. These days, I prefer the one where Cinderella breaks through the glass ceiling. But if I do decide again to don the costuming of love, I’m pretty certain of two things: 1) I will love someone enough to wear a silly dress for him (this is no small amount of love), and 2) I will buy the dress at a thrift store. Because every wedding dress deserves a second chance.
Posted by Anarchist Soccer Mom at 10:40 PM 4 comments: