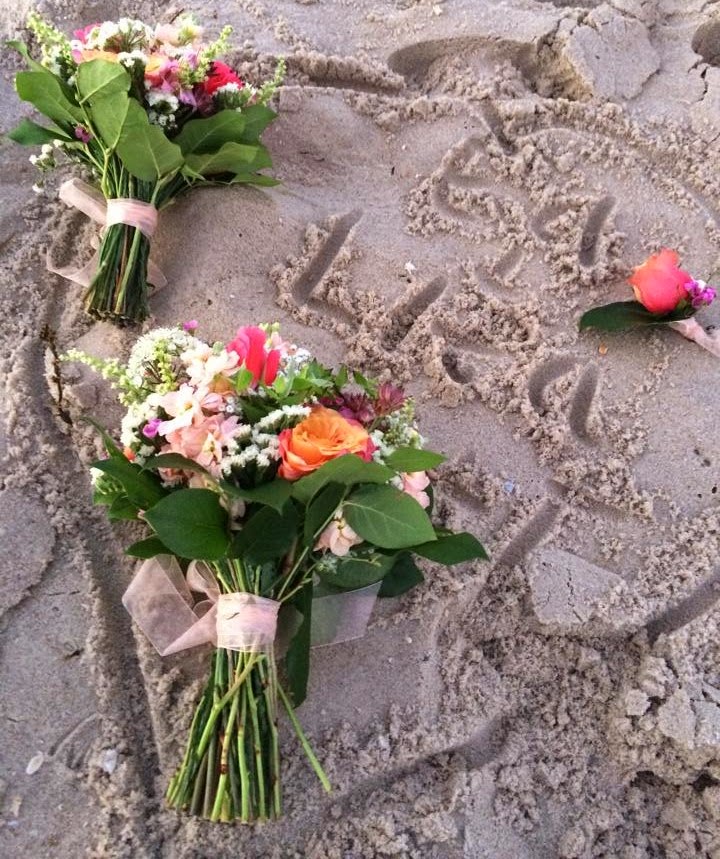 When Cupid strikes a second time, you can wear any color you want

“Know, first, who you are, and then adorn yourself accordingly.”—Epictetus

Author’s note: This week is National Suicide Prevention Week, a time to focus our efforts on preventing the tragic deaths of more than 800,000 people around the world who die each year by suicide. Many of them have mental illness and lack effective treatments. This week, I am in New York City with my second husband (we married in June) to promote my book on children’s mental health, The Price of Silence: A Mom’s Perspective onMental Illness, from Hudson Street Press.

Once upon a time, I wrote a blog about thrift store wedding dresses and second chances. It became a book called Little White Dress: Women Explore the Myth and Meaning ofWedding Dresses. This book earned me, my 25 co-authors, and Mill Park Publishing a 2012 Bronze Ippy Award in Women’s Issues from the Independent Publishers Association of America. This post is a follow-up to that original post. It is also an expression of immense gratitude for the life I have today, and for the man who chose to share it with me and my children.


A few years ago, anticipating what would have been my sixteenth wedding anniversary were it not for my divorce, I wrote a nostalgic post about thrift store wedding dresses and second chances. My essay sparked a steady stream of wedding dress stories—some bitter, some sweet, some funny, some achingly sad, all revealing various aspects of a woman’s life and experiences with love. I was so touched by these stories that I thought, “Wouldn’t it be great if we could collect them in a book?”

So I called Elaine Ambrose, Midlife Cabernet blogger, owner of Mill Park Publishing, and a woman whom I think deserves the title of “Erma Bombeck Part II: The Sassier Sequel.”

“What if we do a book about wedding dresses?” I said. 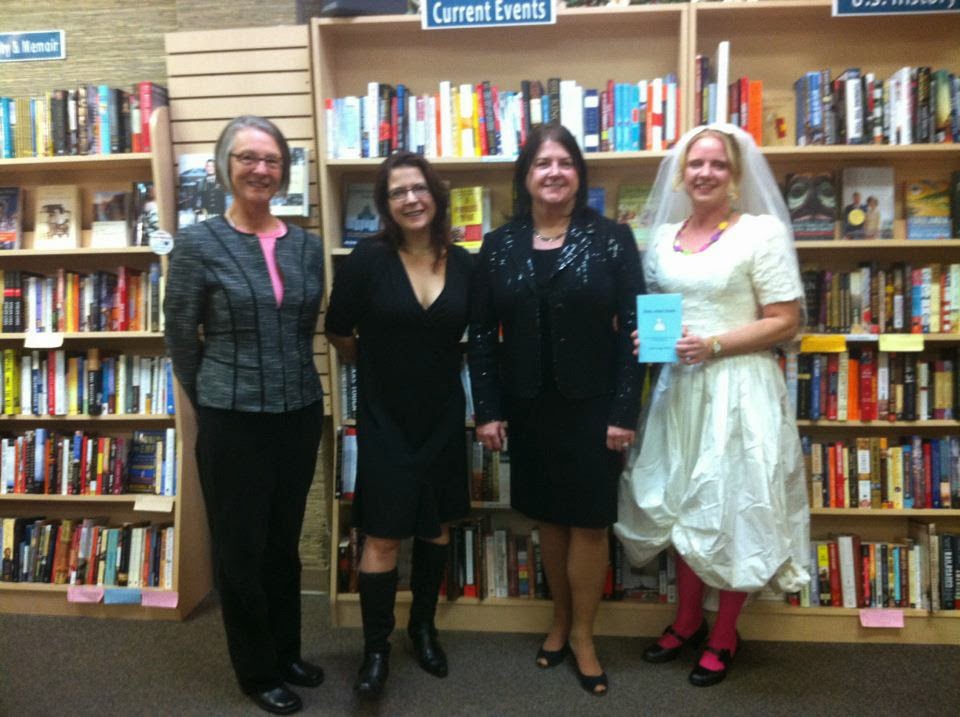 “And what if we put the book together in one day?” I was pressing my luck here—I knew it. But I had this vision, born of too many writing workshops where I left feeling unfulfilled and empty-handed, of creating a physical book in one sitting as tangible proof of my friends’ formidable writing talents

Any other publisher would have said, “Hell, no! There’s no way you can put a book together in one day.”

And so Little White Dress: Women Explore the Myth and Meaning of Wedding Dresses, was compiled on August 8, 2011, three years after my divorce. It took a few more weeks to edit, lay the book out, and print physical copies. But start to finish, we completed the entire project in just a few weeks. Elaine hosted a swanky country club “book reception,” with proceeds benefiting Dress for Success, and I wore my original white wedding dress, a bit snug after four kids, but I could still zip it up if I only took shallow breaths.

I still remember when Elaine called to tell me the book had won a bronze 2012 Ippy Award in Women’s Issues. I was in the grocery store, looking for ketchup. “Do I still have to bag my own groceries?” I asked, so giddy with excitement that I announced the news to everyone on my aisle. I did still have to bag my own groceries. And I still do. But the medal looks really cool hanging on my office wall.

Now, of course, Elaine has surpassed our project with her own silver medal for Midlife Cabernet (the book version of her delightful blog), and I’m sure a gold is in her future.

And last June, I decided to put on a wedding dress again, this time, a blue one.

In August 2011, this is what I wrote about what that day, if it ever came, would mean to future me:

Will I ever wear another off-white dress on a day of goofy rituals? I can’t say right now that I see the attraction to that particular fairy tale. These days, I prefer the one where Cinderella breaks through the glass ceiling. But if I do decide again to don the costuming of love, I’m pretty certain of two things: first, I will love someone enough to wear a silly dress for him (this is no small amount of love), and second, I will buy the dress at a thrift store. Because every wedding dress deserves a second chance. 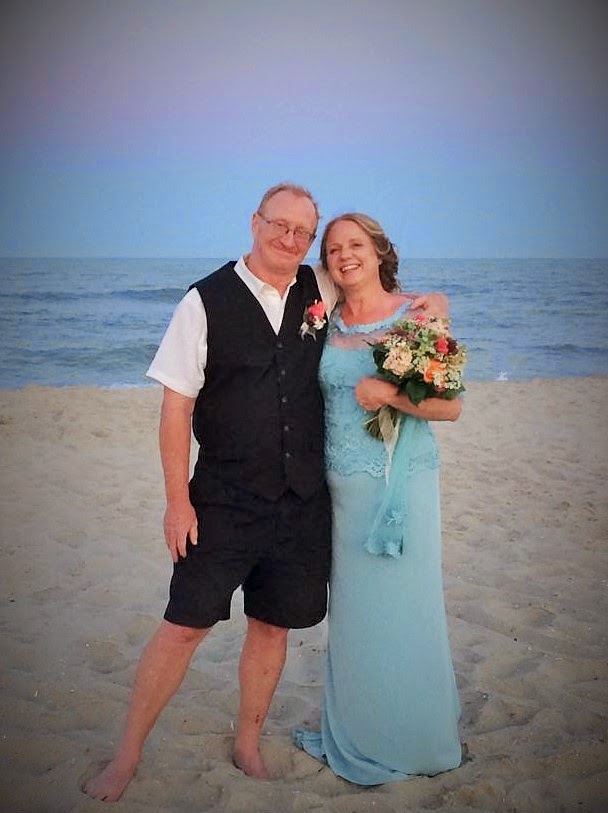 At that time, I had officially resigned from the dating scene. Unpredictable, shallow men felt like a waste of time compared with my kids or my job. And besides, I was spending about half my time at IEP meetings, and the other half at the Ada County Juvenile Detention Facility or Intermountain Hospital, trying desperately to get help for a sweet little boy who sometimes flew unto uncontrollable violent rages.

Little did I know that the whole time I was crying in my cubicle, wondering how I would take care of my son and my other children, I was actually working right next to the person who would be my future partner in crime, Ed Pack, a red-headed Woodpecker who would promise to aid and abet me in a new set of life adventures (yes, that’s a Tom Robbins reference right there, folks).

I guess in hindsight, I should have known I had a thing for Ed when I offered to drive him to his colonoscopy in October 2011. I thought I was just being a nice boss—I was Jack Donaghy picking up Liz Lemon when she had her root canal on Valentine’s Day. The nurse called me “Mrs. Pack” that afternoon, and I didn’t correct her—maybe her comments got us both thinking.

Since we worked together, a romantic relationship wasn’t possible. But we built a solid friendship, sharing hiking stories and swapping books. Several plot twists later, I was working someplace else, and Mr. Pack called me up asked me out for a beer. It was the first of several—okay, four—dates before I couldn’t keep my hands off of him any longer. Yes, he really is that cute!

And yes, it is no small amount of love that led me to a beach in Surf City, New Jersey, to wear a stunning light blue silk charmeuse hand beaded dress (new with tags) that I bought at, you guessed it, the Idaho Youth Ranch Thrift Store for $15. It’s my second-best thrift store find ever. The first was a 1925 Model M Steinway piano, in case you are wondering. 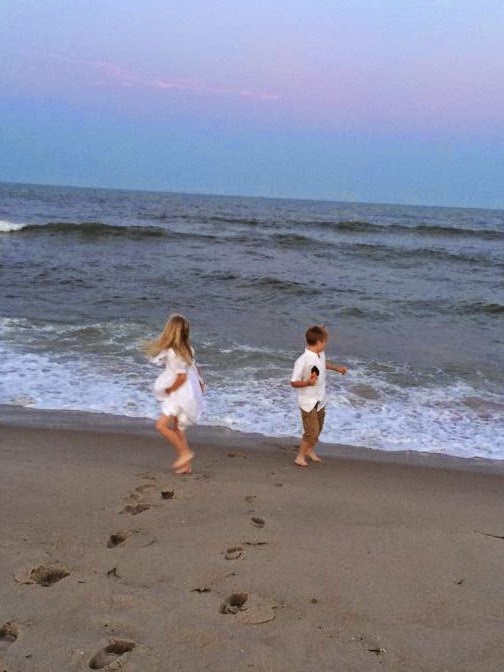 I wrote a bluegrass song for Ed and played it on the iPad. He wrote a poem for me, describing all the adventures we had shared, from backpacking the Washington Coast (“embrace the mud!”) to turning off our cell phones the night my “I Am Adam Lanza’s Mother” post went viral. My kids fought to read us our vows (we had “officially” tied the knot a few days before at City Hall). We took silly beach selfies and watched my younger two play in the waves. I wasn’t too worried about my dress getting wet, because as I mentioned, it was $15. My new sister-in-law provided an elegant touch with peach-colored rose bouquets for my daughter and me, and boutonniers for the boys.

It cannot have been an easy decision for Ed to give up a comfortable solitary existence for the hustle-bustle of my busy life. Similarly, it was very hard for me to develop enough trust in a man to tie the knot again. We both had to be sure we were in this for the long-haul. Everyone has baggage at our stage in life; you just want to be with someone who carries his or her own.

This week, I’m profoundly grateful for that god of second chances, and for a partner who inspires me, supports me, challenges me, and excites me about the possibilities of life. His overarching credo is a sense of wonder, and we share profound gratitude for “all things bright and beautiful, all creatures great and small.” I’m sure we’ll face challenges—all couples do. But I feel confident in our combined ability to weather storms and marvel at sunrises and sunsets—together.