Why I Won’t Comment on Donald Trump and Mental Illness

(Hint: Whether or not he has mental illness does not matter)

Let’s be clear: I hate Donald Trump as much as the next freedom-loving American. Trump is a self-described sexual predator, a liar, a xenophobe, a racist, and a bad businessman. His friends and advisors include white supremacists  like Steve “Darth” Bannon, formerly of Breitbart fame, now wreaking his alt-right havoc on the entire world. Trump has openly expressed admiration for Vladimir Putin, the autocratic Russian leader whose record is not likely to be enshrined in anyone’s Human Rights Museum any time soon.

While I have little else in common with Trump’s supporters, at least now I can sympathize with how that “birther” crowd felt when President Obama was elected in 2008. For reasons too numerous to list here, Donald Trump is #notmypresident.

But while I welcome (and enthusiastically retweet) nearly all negative news and commentary regarding Trump and the Orwellian nightmare he and his evil Avengers have wrought on my beloved America, there’s one “criticism” of him that makes me cringe. Any time a layperson or even an expert weighs in on whether Trump has a mental illness that would make him unsuitable for office, I refuse to engage in the conversation.

The problems with linking mental illness and Trump include but are not limited to the following:
It’s likely at this point that you have read the opinions of people who want Trump’s alleged mental illness to disqualify him as president. But living with a mental illness would not and should not necessarily proscribe anyone from being an effective president.

Exhibit A: Abraham Lincoln. His spells of “melancholy” were well known by friends and foes alike. In his 2005 exploration of Lincoln’s likely clinical depression (the Goldwater Rule does not extend to deceased public figures), Joshua Shenk wrote:

In his mid-forties the dark soil of Lincoln's melancholy began to yield fruit. When he threw himself into the fight against the extension of slavery, the same qualities that had long brought him so much trouble played a defining role. The suffering he had endured lent him clarity and conviction, creative skills in the face of adversity, and a faithful humility that helped him guide the nation through its greatest peril.

Let me be clear: I am NOT comparing Trump, whom I think history likely to judge as America’s worst president, to Lincoln, who to my mind still retains the title of America’s best president. I am, however, making the important distinction that it is not mental illness that makes a president great, or mediocre, or downright abysmal. People are who they are. In Lincoln’s case, and in many people’s cases, the challenges of living with mental health conditions may actually confer certain advantages in leadership positions, including empathy, resilience, and an ability to think creatively.

As a mental health advocate, I am asking my fellow Trump-haters for a favor. Please continue to shame Il Cheeto for his shameless behavior, and even for his tiny hands. Call out his cruel and un-American policy decisions. Keep demanding that he release his tax returns. But stop speculating about whether Trump has mental illness, and whether living with mental illness would make him unfit for office.
Posted by Anarchist Soccer Mom at 9:01 PM 5 comments:

My 2017 Resolution: Liberty and Justice for All!

“Ring out the false; ring in the true!”—Alfred, Lord Tennyson 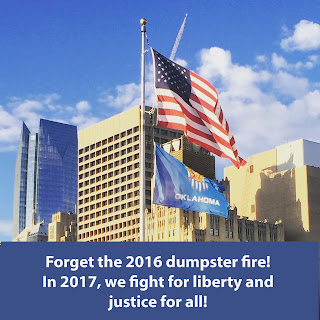 As I scrolled through my friends’ Facebook feeds on New Year’s Eve 2016, noting the pictures of dumpster fires, the scornful expressions of “good riddance,” the laments of trepidation for the future, I also noticed that for many people, 2016 was actually a very good year for personal and professional growth.

2016 was certainly a good year for me. I successfully defended my doctoral dissertation on mental health advocacy and leadership. I started working full time in my dream job, teaching composition to first-year students at a community college. I spoke at several conferences, including the National Council for Behavioral Health, the Domenici Institute 2016 Public Policy conference, and the American Bar Association’s National Summit on the Death Penalty and Serious Mental Illness.

With other mental health advocates, I celebrated the passage of the 21st Century Cures Act, which will hopefully provide more funding and support for people living with serious mental illness. My 2014 book, The Price of Silence, continued to be read and positively reviewed, and my brave son Eric spoke at 2016 TEDx Boise about what it’s like to grow up with bipolar disorder, and how people can help to end stigma one friend and one conversation at a time.
All in all, a pretty good year.

Except for that Trump thing.

Truthfully, the election of Donald Trump won’t directly hurt me or my family too much. We’re white, heterosexual, middle class folks who live in Idaho, that “reddest of the red” states. Though my husband and I both have progressive leanings, we have behaved like good Republicans in our financial lives. We live within our means. We work hard, save aggressively, and donate as much as we can to charitable organizations. We have health insurance through my employer, and when we didn’t, we used a Health Savings Account and a high deductible policy, exactly the “solution” that Republicans are likely to offer as a replacement for Obamacare.

My family has not relied on public benefits like food stamps, even though both my husband and I have experienced periods of unemployment, and my husband, like many white men his age, remains underemployed and would prefer to work full-time.

Still, we have been lucky.

No, Donald Trump’s election (barring the frightening possibility of global nuclear war) likely won’t affect us. We’ll read the horrific headlines and shake our heads in disapproval. We’ll continue to call our elected officials and express our concerns about Russian hacking, gender discrimination in healthcare, and the frightening prospect of erosion of legal protections for marginalized people who should have the same rights as the rest of us.

We are so lucky.

Here’s where I admit something that most of my friends probably don’t know. I’m a registered Republican. In fact, when I consider only my own circumstances and experiences, I’m very attracted to libertarianism, with its inherent meritocracy and limited federal government focused on defense and facilitation of commerce.

When I read Ayn Rand’s Atlas Shrugged in 10th grade, I was completely sold on the gospel of personal accountability. I was a faithful member of a conservative religion that reinforced those values of making good choices, working hard, and reaping the blessings that would come from pulling myself up by my own bootstraps. In that world, financial success was (and still is) visible evidence of good character, of God’s approbation.

Then I grew up. I read Peggy McIntosh’s essay on white privilege, and it resonated. I read bel hooks’s critique of white feminism, and that stung, too. I realized that social justice was not a fashionable accessory to my life; it was the meaning of life.

I learned that life in fact was not fair, that all people did not have equal opportunities, that even when I’d faced challenges, the world had been uncommonly gracious and accommodating to me.

This shift in perspective took several years of sometimes painful self-examination. It took losing my religion, my first marriage, and most of my friends. In fact, the process is still ongoing. I still make so many mistakes. But I have learned a few things.


One of my father’s (and my) favorite hymns begins with these words: “Because I have been given much, I too must give.” For those of us, like me, who have more than enough, giving to those who have less is the only moral choice. In fact, as C.S. Lewis wrote, we should give until it hurts.

And then give more.

Sure, on a superficial level, Donald Trump may not hurt me personally. But the sudden erosion of our democracy hurts all of us. My 2017 resolution is to fight like hell whenever I see others’ rights trampled on. It’s to join my voice with others who are calling out for justice. It’s to give all I can, and then give more.

I’d still like to see the Republican ideal of equal opportunity for all. But today’s Republican Party seems to be dedicated to a very different platform, one that robs from the poor to pay the rich, that excludes minority religions, that suppresses free speech, that appeals to fear rather than calling people to love. These are all dangerous signs of authoritarianism, and they must not continue unchecked.

In 2017, I will defend my country's promise of liberty and justice for all. I will stay awake.
Posted by Anarchist Soccer Mom at 11:29 AM 1 comment: