The Price of Silence 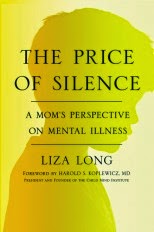 Dear Friends,This is a humbling day for me. The first time I read a book and realized the power that words can hold over our hearts and minds, I knew that I wanted to write. Today, my dream of publishing a book has come true with The Price of Silence: A Mom's Perspective on Mental Illness, from Hudson Street Press.But for me, the price of realizing my dream was beyond anything I imagined. I wrote The Price of Silence because like most  of us, after Newtown, I wanted answers. My quest through the complex and often hostile systems that families and children who have mental illness must navigate was personal: I live this experience daily with my dear son.Kirkus Reviews described my book as "a searing indictment of the lack of affordable care available for the treatment of mentally ill adolescents."

Andrew Solomon, author of Far From the Tree (which everyone should read), wrote:

In this courageous, determined, radical book, Liza Long exposes the dearth of alternatives for parents of kids with mental illnesses, the shame that attends their perceived failures, and the hope that such families may find their collective voice and demand better options.  I hope her passionate cry is heard far and wide.

I am profoundly grateful to the families, providers, police officers, educators, and advocates who shared their often painful stories with me. It's not easy to talk about mental illness; I know that truth firsthand. And I am especially grateful to my son, whose perspective provides valuable insight into mental illness and how it affects children. His humor, intelligence, and love have made my life immeasurably better. He is not a bad kid--he is an incredibly brave kid (and he just finished writing his first book! At age 14! It's about demigods from outer space).

But today, though I am grateful that so many people are speaking up and sharing their stories. I am also saddened at our inability as a society to act. People who have mental illness, including children, are "treated" in jail or left to die on the streets or by suicide. This is a national tragedy of epic and growing proportions. I feel that we have a moral obligation to care for our children, brothers, sisters, parents, friends, and colleagues who have mental illness.

I hope you will read my book. But more importantly, I hope that you will join me in speaking up for change. Please contact your representatives in  Congress. Join Treatment Before Tragedy. Participate in your local NAMI walks this fall. And share your stories. Their truth is powerful. Together, I know we can make a difference. In the words of one of my favorite poets, Robert Frost:

Only when love and need are one,
And the work is play for mortal stakes
Is the deed every really done
For heaven and the future's sakes.

Best to you all!

P.S. If you do want to buy the book, please consider a local bookseller. Here are two of my favorites:

Posted by Anarchist Soccer Mom at 7:00 AM 13 comments:

On August 12, 2014, as the tragic news of Robin Williams’s death spread like a contagion through my Twitter feed, I realized something: you could tell how old people were by the movie lines they quoted in response. For me, it was Dead Poet’s Society, that iconic struggle of life (and death), and the Walt Whitman line, “That the powerful play goes on, and you may contribute a verse.” Or a whole stanza, when you’re an epic figure like Robin Williams.

My next thought, though, was of David Foster Wallace. I took his 2008 suicide pretty hard. Foster Wallace was one of those authors with whom I had an intellectual affair of sorts—when I read Infinite Jest, I felt like he was speaking to me in a code that only he and I could understand. So of course, upon learning that Robin Williams’s heroic struggle with lifelong depression had ended, I thought of Foster Wallace’s description of why people who suffer from a choice-stealing brain disease sometimes end their own lives:

“The so-called ‘psychotically depressed’ person who tries to kill herself doesn’t do so out of quote ‘hopelessness’ or any abstract conviction that life’s assets and debits do not square. And surely not because death seems suddenly appealing. The person in whom Its invisible agony reaches a certain unendurable level will kill herself the same way a trapped person will eventually jump from the window of a burning high-rise.”

I felt the exact same sadness upon learning of Robin Williams’s untimely exit from this world that I would have felt if I had learned that his struggle with cancer or any other disease had ended. But not everyone saw it that way. If you didn’t read Matt Walsh’s tone-deaf diatribe describing suicide as a choice, don’t. But if you did, see how his words read when the word “depression” is replaced with “cancer,” and you’ll have some idea of how hard it still is to talk about mental illness.

Also, incidents like this give us an opportunity to talk about cancer, and we certainly should.  Only we shouldn’t turn the subject into a purely cold, clinical matter. “Chemical imbalances,” people say. “A man is cancerous because of his brain chemicals, and for no other reason.”

No, we are more than our brains and bigger than our bodies. Cancer is a mental affliction, yes, but also spiritual. That isn’t to say that a cancerous person is evil or weak, just that his cancer is deeper and more profound than a simple matter of disproportioned brain chemicals. And before I’m accused of being someone who “doesn’t understand,” let me assure you that I have struggled with this my entire life.

Like Matt Walsh, like many people, I have had my own struggles with depression. David Foster Wallace’s description of suicide resonates with me so strongly because late one night, in the throes of despair at the end of my marriage, overwhelmed by a loss of faith, I thought I was at the top of a burning building, and I thought I would have to jump. In that moment of agony, I truly believed there was no other way, that the world would be a better place without me.

And in that moment, by chance or by grace, one of my children woke up and came to me, like an angel, and said, “I love you,” and cuddled in my arms, his head snuggled just below my chin, like he did as a baby. I’m probably remembering this quote wrong, but I think the Greek dramatist Sophocles said something like “Children are the anchors that hold a mother to life.” In that moment, anchored to life by my sweet child, I knew I could—and would—escape the burning building and live.

But unlike Matt Walsh, I do not begin to presume that my ability to survive serious thoughts of suicide was in any way due to something special about me. I’m not strong or brave or unselfish; I was lucky. And I had an incredibly happy childhood, which makes up for a whole host of ignominies later in life. Very few people in this world are as fortunate as I am, and I give thanks for what I have every single day.

Words have power. And words are our only way to move beyond the solipsistic existence of our own minds and into shared community with others. Yet the existential conundrum of life is that we are all, ultimately, alone. As Andrew Solomon noted in his poignant tribute to Williams, “The Crime of Loneliness,”

“A great hope gets crushed every time someone reminds us that happiness can be neither assumed nor earned; that we are all prisoners of our own flawed brains; that the ultimate aloneness in each of us is, finally, inviolable.”

Which brings me to language, that mechanism of hope that sometimes allows us to escape the prison of our own minds. Here’s the thing: the word “commit” and the word “suicide” don’t belong together. They just don't.

In certain contexts—career, relationships, goals—the word “commit” has positive connotations. My friend Heidi Reeder’s book Commit to Win, for example, outlines strategies to succeed in work and life by harnessing the power of positive commitment. I think we would all agree that this kind of commitment—a choice to focus on the people and things that matter most to us—is good.

But in mental illness, the word “commit,” in both its active (e.g., “to commit suicide”) and passive (e.g., “to be committed to an institution”) forms, has damaging connotations that falsely convey a sense of choice where too often no meaningful choice exists. People don’t “commit” suicide. They die by suicide, or they complete suicide (too often after more than one attempt).

Dr. Thomas Joiner has made it his life’s work to understand why mental illness sometimes leads to death by suicide; he notes that the rarity of suicide notes suggests how profoundly alone and unable to communicate people who take their own lives feel at the end of their existence:

“To say that persons who die by suicide are lonely at the time of their deaths is a massive understatement. Loneliness, combined with alienation, isolation, rejection, and ostracism, is a better approximation. Still, it does not fully capture the suicidal person’s state of mind. In fact, I believe it is impossible to articulate the phenomenon, because it is so beyond ordinary experience. Notes are rare because most decedents feel alienated to the point that communication through a note seems pointless or does not occur to them at all."

There are therapeutic treatments for mental illness, just like there are therapeutic treatments for cancer. But with both diseases, not everyone survives. Robin Williams’s death was a tragedy, but it also gave us an opportunity to speak up, to share our stories, and to demand better treatments, earlier interventions, and evidence-based care for brain disease. We need Treatment before Tragedy.

The words we use to describe suicide—and mental illness—matter. They shape our very understanding of the disease, and how we treat the people who have it, including ourselves and our loved ones.

As William Stafford, himself a venerable member of the Dead Poet’s Society, wrote (far better than I could, and with words I think Robin Williams would appreciate):

"And so I appeal to a voice, to something shadowy,
a remote important region in all who talk:
though we could fool each other, we should consider--
lest the parade of our mutual life get lost in the dark.

For it is important that awake people be awake,
or a breaking line may discourage them back to sleep;
the signals we give—yes or no, or maybe—
should be clear: the darkness around us is deep."
Posted by Anarchist Soccer Mom at 1:24 PM 2 comments: