The Third Week of October 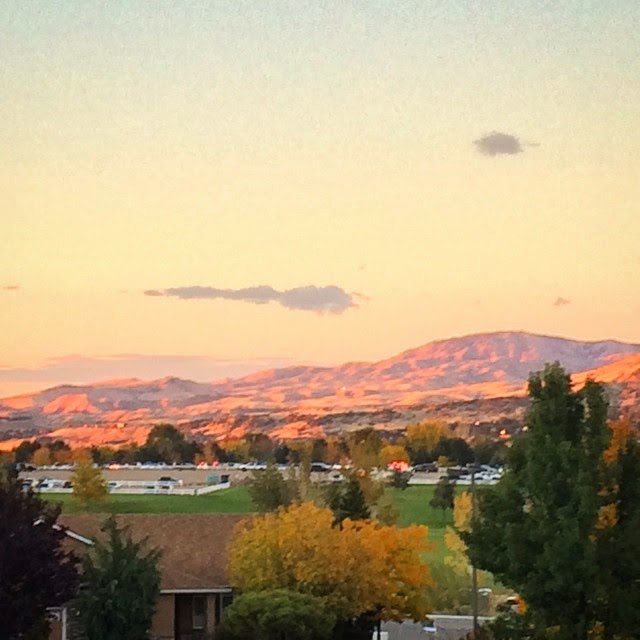 One evening just before sunset in the third week of October 2014, I walked down the hill from my new home to the soccer fields. The Boise foothills glowed rose and gold in autumn sun’s last light, and the manicured emerald fields rang with cheers and groans. My oldest son once played on these fields, in another life, before my divorce. I have since learned that memories can change.

The long lean years of dingy apartments, of rice served at every meal, of every phrase qualified with “if the good Lord’s willing and the creek don’t rise,” those years (God willing!) are over. To walk out of my home—our home—to see those soccer fields, those glowing foothills, to look back at the picture window, the piano, the wall of books (his and mine), was a dispensation, a manifestation of grace.

Twenty years ago, in the third week of October, my father died. He was 50.

I’m still sad about his death. With the removal of the bereavement exclusion in the DSM-5, the fact that I still tear up twenty years after losing my father to cancer might indicate I’m depressed. I’m not—I’m just sad. Sad to think of the grandchildren who never met him, the hikes we could have shared, the conversations about faith and life and books and science—his avocation—that would have kept us up late at night.

That’s one of the challenges facing modern psychiatry. What type of grief is normal? To me, it seems that psychiatry, in attempting to answer this question, has barely moved beyond augury or astrology. As I walked around the soccer field that evening, a bright copper coin stood out in sharp relief against the sidewalk. I stopped to retrieve it, certain (as I always am when I find pennies) that it was a sign. Our silly brains see patterns in the flight of birds, in sheep entrails, in spare change on sidewalks.

The year my father was diagnosed with cancer, I learned a German word that has stuck with me when all the other German words I learned in college have fled. Unheimlich. This cognate’s meaning can be easily guessed—heimlich for “like home” or “comfortable,” unheimlich for uncanny. It’s the discomfiting sense of being a stranger in a land that should feel familiar.

That’s how I always feel in the third week of October. We can be orphaned at any age: I was orphaned at 22, on the cusp of my adult life, not quite ready to put away childish things or to acknowledge the reality of death. As I thought of my father, the bright penny’s startling appearance banished the ghosts and brought back a sense of comfort, of belonging, of home.

Gazing at the soccer fields, clutching my copper token of the universe’s momentary good will, I was transported suddenly into a present-tense past. I see myself at nine, my daughter’s age, my hair in two braids, standing on the lawn outside our home in Pennsylvania. It’s my birthday, and I’m wearing a leather softball glove, still stiff with newness. My father stands across the way, a white ball in his hands. “Was it okay to get you this?” my father asks. “I wasn’t sure if you would like it. I mean, you’re a girl. I mean, a wonderful girl! You can be anything you want to be!”

My father loves sports—football, baseball, basketball. I’m his oldest child, and already, I’m more of a book girl than a baseball girl, which doesn’t seem to disappoint him in the least. His own father died when he was just seven years old, so he is always trying to make sure that everything is “okay,” that his performance as a father is meeting our needs and expectations, that we know we can give him honest feedback.

Standing in the yard with him playing catch, I know, even as a child, that my father’s gift—what he himself wanted as a nine year old—is the best possible gift he can give me, even though I’m not particularly athletic. As the ball connects with my mitt, a satisfying thump, I feel the love my father has for me radiate up my arm and all through me.

And that present-tense moment, a father tossing a white softball to his nine-year old daughter years later on the soccer fields in Boise, Idaho, is still happening, and was always happening, and will happen forever.
Posted by Anarchist Soccer Mom at 1:05 PM

From this blog you will get all the info that you need to write good looking resume for a designer. Make sure to chekc it out as soon as possible

Manga Panda is a very popular website for Manga. Additionally, a collection of the new manga comics can be found on this website. These new manga are grouped in order of alphabet.
1000 free English translation comic series can be found at Mangapanda. You can find tabs on the Manga Panda website for Famous Manga, Manga Directory and New Releases. The Manga website that is the most famous.

Putlocker may be a seamless portal for television, series, movies, songs, etc. for free. it's not mainly for any film or language, from Hollywood to Bollywood, one can have access to each possible movie. In fact, unlike other portals who operate completely illegally, Putlocker has an official site named Putlocker.com that a broad base of individuals is mad.

For the official content recorded, over 1.6 million people worldwide made access to it portal on a per-day basis. because of the piracy issues, it faced a report by motion picture Association of America, which led to its pack up by the united kingdom court Order. it had been considered together of the highest 250 sites visited by the people worldwide. Although, thanks to its massive fan base, Putlockers remains operated under different proxy websites.


In October 2018, the MPAA's report on Online Notorious Markets to the United States Trade Representative, said that the conclusion of 123movies, 123movieshub, gostream, and gomovies, by walking of a criminal examination in Vietnam in 2018, was "a significant turn of events" in combatting illicit film theft administrations. In any case, the MPAA report additionally noticed that various copycat locales had risen in any event eight different nations. In November 2018 TorrentFreak revealed locales associated or like 123Movies, for example, WatchAsap had additionally been closed somewhere around the FBI, yet were re-coordinating to other document sharing destinations.

Can you use راهنمای خرید this plugin to add مجله ریما files to the user’s account (i.e., can I, as the admin, go in and upload a PDF file to a specific user’s account, and perhaps have ضد فراماسونری that user get some notification that a file has been uploaded  اسمارت مگ     to their account?).