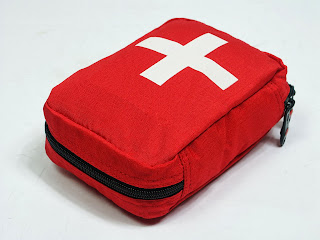 Why we need first aid kits for physical and mental health

On the first Wednesday of December, I had big plans for my children. There’s something about this past year—the stress, the anxiety, the uncertainty—that has made me nostalgic for Christmas in a way I haven’t been for a long time. I gave up on physical Christmas cards years ago, opting for email ostensibly because I wanted to be green, but really because I was just lazy. And even an artificial tree is usually too much work.

Wednesdays are important days for me. Since my blog about my son with mental illness went viral in December 2012, four hours after school and every other weekend have been my only times to be with my younger two children. When you have to cram a whole week’s worth of love into four hours, every minute, every second counts. And this first Wednesday in December, I wanted to create perfect Christmas memories.

In hindsight, I should have listened to my daughter. She wanted the smallest tree, but her brothers talked me into a bigger one, perhaps too large for our two-bedroom town-home. We lashed the tree with twine to the top of the car, and I made my way home with an excess of caution, annoying the drivers behind me as the kids and I hollered out Christmas carols at twenty miles per hour.

“Let’s saw off the end of the tree so it can hydrate,” I told my 16-year old son when we got home. We hunted for the saw, an old dull one, and he began to work in earnest on the trunk. It was knotty. I held the tree firmly between my knees as he sawed. “Be careful,” I warned.

Too late. In one instant, the saw glanced off a knot, gauged into his finger. He cried out and ran into the house to apply pressure while I hauled out the first aid kit. As we wrapped his throbbing, bloody finger in gauze, it was clear that we needed to get medical attention right away. My mind raced—I thought of my son’s piano playing, his dream of becoming a surgeon. Could one freak Christmas tree accident ruin everything?

We piled into the car and drove around the corner to the Doc in a Box, where we are on a first name basis with the staff.

More than two hours (and nine stitches) later, it was time to take the younger children back to their Dad’s house. No cookies, no fudge, no cocoa. No decorating the tree, which lay forlornly on its side, shedding needles all over the carpet.

“Mom,” my 14-year old son said when I got home. “I think it would be a good idea if you did all the sawing from now on. It was really inconvenient to have X cut his finger like that, right during our time with the kiddos.”

(Thank you, son, for stating the obvious).

My son sliced his finger just a few days after the Connecticut State Attorney released the report about what happened at Sandy Hook Elementary School last year. And that report has been on my mind. The verdict? No answers. Lots of legally purchased guns. And a young man with a long history of mental illness.

"The obvious question that remains is: “Why did the shooter murder twenty-seven people, including twenty children?” Unfortunately, that question may never be answered conclusively, despite the collection of extensive background information on the shooter through a multitude of interviews and other sources…. It is known that the shooter had significant mental health issues that affected his ability to live a normal life and to interact with others, even those to whom he should have been close. As an adult he did not recognize or help himself deal with those issues."

No answers. It’s the hardest thing about life, isn’t it? When something bad, worse, or truly horrible happens, we want answers. We want accountability. Maybe we even want revenge.

At the very least, we crave simple cause and effect. We want fairness, and we want life to make sense.

But it doesn’t. It just doesn’t.

After my son cut his finger, my friends tried to make light of it. “Anyone can have cookies and cocoa,” one joked. “How many people get stitches for Christmas? That’s the way to make lasting memories!”

I'd still prefer the other, more conventional memories. For me, the accident was a reminder that sometimes bad things happen, and those things are beyond our control. In fact, all too often, all we can control is our reaction to the event.  We can choose to hate. Or we can choose to forgive.

What have we, as a society, done since Sandy Hook to help people with “significant mental health issues,” people like Adam Lanza, Jared Loughner, Seung Hui Cho, James Holmes, Aaron Alexis, Gus Deeds? In my essay last year, I said that it was time to talk about mental illness, and it was.

It’s still time to talk. And it’s definitely past time to stop blaming the mothers, a memo I’d like to send to Emily Miller, senior opinion editor of the Washington Post, who apparently still thinks that’s the solution:

"In the end, we can’t blame lax gun-control laws, access to mental health treatment, prescription drugs or video games for Lanza’s terrible killing spree. We can point to a mother who should have been more aware of how sick her son had become and forced treatment.”

But Adam Lanza was 20 years old. Even if his mother had recognized that his insistence on communicating solely through email was a little off, Nancy Lanza would have had a potentially uphill fight to force treatment for her adult son, as Pete Earley and others have noted. The fact is that the whole system is broken, and tragedies like Newtown are inevitable until we start to make real changes in how we view and treat mental illness.

In a pointed call for action nearly one year after the Newtown tragedy, Linda Rosenburg, CEO of the National Council for Behavioral Health, recommended a practical, real-world solution: Mental Health First Aid training for everyone, so that we all can recognize the early signs and symptoms of mental illness and intervene before it’s too late.

“Mental Health First Aid makes it OK to have the difficult conversations — it helps people open up and talk with family, friends, and coworkers. It ends the isolation and offers a path out of the despair,” Rosenburg wrote.

Mental health first aid might be just what we need. When my son cut his finger, we grabbed the first aid kit. Then we called the doctor and got him the care that he needed. In a few more days, he will play Christmas carols with a healthy finger.

It’s about time we had the same solutions for mental health. Enough talk. It’s time to act.

Given that Nancy Lanza was fully aware that her son was very, very sick and working desperately hard to find some sort of treatment for him, it probably would have been a good idea to store her arsenal of legally obtained guns and ammo someplace else, i.e. not at home.

While Adam Lanza's massacre isn't entirely her fault, she definitely made it easier for him to kill people (see: arsenal of weapons) and indulged him when he was 18 or under and COULD have forced treatment -- or refused to let her son stay in her house once he ceased speaking to her. Allowing your precious little snowflake to boss you around via text message did no one, least of all him any favors.

I'm not going to second-guess Nancy Lanza. Like all of us, she made the best decisions she knew how to make, and paid personally when she was wrong.

In light of my own experience I am finding the assumption that if you only try hard enough (and, ideally, have lots of money) you can find a treatment for a mentally ill child. We could not, and the barrier was not financial. There is no bandaid for this, and sometimes no more fundamental treatment either.

All human societies have struggled with mental illness; none that I know of has found the answer.