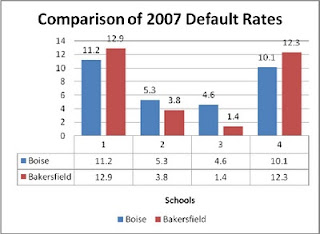 In a recent speech on education, President Obama set some lofty goals for American colleges and universities: "It's essential that we put a college degree that's in reach of everyone (who) wants it," he said. Yet just six days before he gave that stirring speech, his administration released a proposed set of rules that could potentially take college dreams away from an already underserved population—and put thousands of people out of work. The so-called “Gainful Employment” rule would require for-profit schools to limit the debt-to-income ratio of their graduates to just 8%. In other words, you can buy a car on credit, you can buy a house on credit, but you can’t buy an education at a for-profit career college on credit.

Granted, there’s a legitimate cause for government concern. For-profit schools take taxpayer money in the form of federal student loans (and after the administration’s quiet assumption of all student lending in March, federal student loans are the only game in town). If their default rates are higher than not-for-profits, then limiting the federal dollars that go to these schools by setting stricter requirements is a no-brainer, right?

Not so fast. As always, the details are in the numbers. When you examine the statistics on their face, they look grim: a recent Education Department study, for example, found that only 36% of for-profit school graduates paid back their loans, compared to 54% at not-for-profit schools. But are we really comparing apples to apples here? And are the “predatory lending” and other shady ethical practices we hear so much about in the news these days really typical of the for-profit industry as a whole?

I looked at government default rate data for four different types of schools in two similar communities—Boise, Idaho, and Bakersfield, California—to see whether I could spot any trends. What I found suggests that the Obama Administration is using proprietary education as a scapegoat for problems that plague higher education as a whole. In both communities, for-profit career colleges mirrored national averages with default rates that were higher than the local four year universities (see Table 1). But when compared to local public community colleges, proprietary schools’ default rate differences were negligible, which also maps the national data. Interestingly enough, next to private universities in both communities, four-year universities don’t look so good, again mirroring higher education as a whole.

You can spot the trend pretty quickly: public community colleges and private proprietary schools serve the same student population, one that is largely made up of the very students to whom President Obama promised a college education in his recent speech—the single mothers, the first-time college students, minorities, those with learning disabilities, desperate, deserving people stuck in low-paying, dead-end jobs. And yes, when it comes to loan default rates, that population is by definition riskier—much riskier than the students who attend private colleges, for example.

But these nontraditional students also have the most to benefit, with potential sweeping changes for them, their families, and for society as a whole. Education really can be the key to changing people’s lives, and while this industry, like any industry, should be regulated against unscrupulous or deceptive practices, we should also honor the basic premises on which this country was founded: we should let people choose their own “pursuit of happiness.” With no appreciable difference in default rates between two-year public school graduates and two-year proprietary school graduates, why make rules that unfairly target an already underserved segment of the population?

If the federal government is really concerned about loan default rates, perhaps they should start examining programs like the one I majored in—the Humanities, a field where 23% of graduates owe more than $30,000 and 14% more than $50,000 upon graduation, all while competing for increasingly scarce jobs that don’t pay well. I earned a masters degree from one of the most reputable Classics graduate programs in the nation, the University of California, Los Angeles. When asked what one does with an M.A. in Classics, I typically quip, “Well, I can ask ‘Do you want fries with that?’ in five languages, two of them dead.” I am lucky to be employed as the Chair of General Education at a proprietary college, where my passion for liberal arts education and lifelong learning means that I am committed to providing my students with the very best instructors and curriculum I can give them.

While my for-profit college might not have the wide variety of course options I experienced in my own university training, I believe that proprietary education delivers. Unlike public and private not-for-profit universities, we have a powerful incentive to take the most intransigent students and transform them into polished professionals: our very existence already depends on our ability to place these graduates in jobs. As a March 2010 study from the Parthenon Group noted, “Even with this more challenging student population, the private sector generates superior education outcomes as evidenced by a 65% graduation rate (compared to only a 44% graduation rate at community colleges).” NOW we are comparing apples to apples.

As for “gainful employment,” according to ACICS, the national organization which accredits my school and 700 others nationwide, in 2008, nearly 60% of its 117,000 colleges’ graduates found jobs in their field of study, with an additional 10,000 finding jobs in a related field. Indeed, while the Obama Administration seems to have proprietary education fixed firmly in their sites, the real crisis in education could very likely occur in the not-for-profit sector, where plummeting endowments coupled with a rapidly rising demand for services may simply be unable to meet the nation’s educational needs.

So what can be done to prevent for-profit education from becoming the next sub-prime mortgage meltdown, as some have suggested? It’s simple: if you’re going to set standards, then set them across the board. If you’re going to raise the bar, then raise the bar for everyone. Don’t unfairly target an industry that uses the proven nimble and efficient mechanisms of capitalism to provide a superior product—in this case, a potentially life-changing education to the nation’s “tired, poor, huddled masses yearning to breathe free.”

Call to action: Please think about what you’ve read, here. If you feel like I do, then visit bmcactioncenter.com and write your congressperson today.

There's an essential problem with your assumptions here: you have never personally explored an education at a vocational for-profit school. My husband wanted to become an ultrasound diagnostician, and there are 2 programs in our area. One is community college based program that costs about $10k. The for-profit college program costs almost $40k. We thoroughly investigated both programs, and the more expensive one is not better, it does not have a better reputation, and most importantly it does not have a better hire rate after graduation. But... this more expensive program also runs commercials constantly. The populations that enroll in these programs may not know to comparison shop for the less expensive but poorly publicized community college program.

And with these factors, and by virtue of being so, so, so much more expensive than the public college program, they ARE predatory.

I think you're right that lumping all for-profit colleges into the same boat simply because they share that status is wrong.

But I'm dubious on the university-raising-wages proposition.

"and after the administration’s quiet assumption of all student lending in March, federal student loans are the only game in town"

Nonsense, the federal government has not banned private lending for the purpose of paying tuition and other educational fees. It has simply limited what it will guarantee. If you want people to be able to pursue happiness however they choose to do so, why should the government be responsible for it? Let for-profit colleges' students get their money from for-profit financial institutions, without any government backstop.

Here you can sell and buy both new and used products.
This website is perfect for selling just about anything at all.
More at postallads4free.com