Thoughts on Kant, Fox News, the Bible, and the Separation of Children and Families at the Border

I am taking the time to write this to you after unfriending you on Facebook so that you will understand that I share your sorrow at losing a lifetime of close friendship over a single U.S. government policy: the decision by the Trump administration to separate children seeking asylum from their families at the border. However, while I believe that reasonable people can and should disagree about solutions to problems, the fact that you have attempted to justify this policy suggests that we no longer share common values.

Let me explain. In 1993, when I was 21 years old and studying abroad in Rome, I traveled to Dachau, Germany to see what was left of a concentration camp. Though I have rolls of pictures from my time in Europe, I have no pictures from Dachau. No image could capture the palpable sense of evil that pervaded that place. The moment our train entered Germany, I felt something change. There was a weight in the air, which I interpreted as a sense of collective guilt, of national shame, for so many needless deaths, for so much hate brought into the world in the name of god and country.

Dachau changed me. I still remember the sick pit in my stomach when I saw all of the children’s shoes, piled high in columns. So many small, leather laced booties. The guards told their mothers that the children were being separated to take showers. The mothers and children never saw each other again.

I used to think that though Americans had our differences on many things, we could all agree on a few things, like, “Nazis are bad,” and “children deserve safety and security.” But I’ve learned since the 2016 election that I was very, very wrong.

While reasonable people can certainly disagree about the best solutions to illegal immigration and the current influx of asylum seekers, there are some things that are just wrong. Policies that create irreversible trauma for innocent children are immoral.

You wrote to me,

“Sorry, I think the problem lies in the fact that you want 100% mercy for the children of these illegal immigrants. I do too. However, I believe that you cannot really receive 100% mercy without receiving justice as well. Many changes need to be made to fix this problem. Amnesty, open borders, or turning a blind eye is neither mercy or justice.”

To be clear, I have personally never advocated for open borders, and I’ve never met a “liberal” who felt that way either. I think that the hypothetical person you addressed here is a Fox News strawman. In fact, as you clearly know, there’s lots of bipartisan support for immigration reform, at least on paper and in politicians’ press conferences and Twitter feeds.

According to a 2017 Fox News Poll,  83% of Americans support a path to legalization of status for immigrants who are living and working here, and I am one of them. I especially support the DACA program recipients who have lived here most of their lives and are often already productive members of our society. And like most Americans, I also support a migrant guest worker program that would provide legal status for much-needed workers, especially in heavily agricultural states like mine.  As Eduardo Porter wrote in his 2016 New York Times opinion on managing immigration,

“Rather than building a bigger wall, [the solution] consists of opening a door in the wall we have. The best way to stop illegal immigration may be for Mexico and the United States to create a legal path for low-skill Mexicans seeking work in the United States.”

If so many of us agree, why hasn’t Congress acted? Like most seemingly perplexing problems (including our broken mental healthcare system, where I spend most of my time advocating), we should follow the money to find our answers.  It's not a secret that our current immigration system allows for the black market economic exploitation of migrant workers who do not have legal status. In fact, certain sectors of our economy, most notably food production and construction, depend on this “nod and wink” undocumented migrant worker system.

And let’s not even get into the deplorable human trafficking industry, because that’s just a whole separate conversation right there. 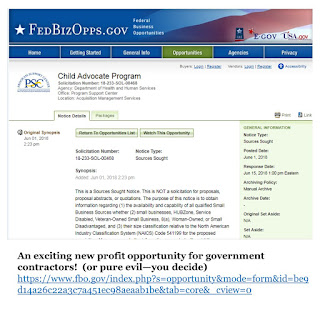 Like human trafficking, it seems that the Trump administration’s new policy also has profit and corporate interests at heart. Who will house and care for these children? That sounds like a pretty lucrative new contract to me. We have already seen how the privatization of prisons has disproportionately harmed people with mental illness. Now the New York Times and others are reporting that military bases have been told to prepare for as many as 20,000 children in coming months. Defense contractors stand to make millions off of these children’s and families' pain.

When I looked at those little shoes of dead children in Dachau so many years ago, I never thought I would live to see an America where Nazis marched openly in the streets chanting “Blood and soil,” or where white supremacists became policy makers. In his stated goal to “make America great again,” President Trump seems to have returned to the noxious idea of Manifest Destiny, which, incidentally, was the only thing I learned about American history in high school. I am now more informed about things like the genocide of native people and the way in which Jim Crow and segregation deprived generations of African Americans of the American Dream white people came to expect.

I now sum up Manifest Destiny like this: God favors capitalist white people of European descent. So we can pretty much take what we want.

Yes, I say “we.” To be clear, I have always been the whitest white girl in any room. Most of my ancestors came here in the 1850s as pioneer immigrants from England and Scandinavia—you know, Norway, not a “shithole” country like Honduras. I’m being sarcastic. I can’t say I don’t see race, because it’s pretty clear that white people like me have enjoyed all kinds of systemic privilege. As Beverly Daniel Tatum, a professor of psychology and expert on race relations, said in an interview with PBS, “For me the relevant issue is not, "Are you racist?" but are you actively working against that system of advantage?”

I do see race. And when I see race, I see social injustice. This current crisis is no exception. Let’s be honest: We would never let white children be treated like this.

I watched Fox News a few days ago (June 18, 2018) because I wanted to understand why my normally reasonable conservative friends like you were spouting nonsense on Facebook and Twitter about the clearly moral crisis of children being separated from their families at the border.

In the space of just two minutes, I heard the following:


I don’t know how else to say this: It’s hard to have a reasonable conversation when everything that comes out of the other person’s mouth is a logical fallacy.

On a personal note, you may not know why these border children and their mothers matter so much to me. I feel their pain. As a mother, I have experienced firsthand the trauma of being separated from my children—and I would not wish it on anyone. On December 24, 2012, a family court judge in Idaho determined that my younger two children were not safe in my home. He removed them from my physical custody and placed them with their father. They were seven and eight years old. Before the order, we spent 50% of our time together. After the order, we got to see each other for four hours on Saturdays, with no sense of when, if ever, things would be normal again.

The hearing resulted from a blog post I wrote after the tragic school shootings at Sandy Hook Elementary School, picked up under the title “I Am Adam Lanza’s Mother” by Boise State University’s The Blue Review. I described my then 13-year old son’s dangerous behavior that resulted from his mental illness. Though I also described our family’s safety plan, developed with the help of Child Protective Services, the Idaho judge decided that my children were in imminent danger.

More than five years later, I still wake up in the night shaking, thinking that my children are gone. I still experience debilitating autonomic symptoms including panic attacks. My children also suffered damaging psychological effects from the separation, even though they always knew where I was and that I loved them and wanted them, a luxury that the children detained in border camps do not always have. 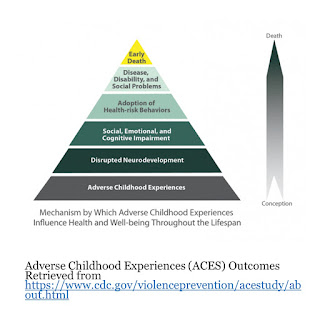 In fact, the lifetime harmful effects of childhood trauma  are well documented. The 1998 Centers for Disease Control/Kaiser ACES study tracked the impact of a variety of childhood traumatic events on lifelong mental and physical health. Childhood trauma is correlated with increased risk of neurodevelopmental disorders, emotional and cognitive impairment, risk-taking behaviors, and early death.  Some children younger than five who are separated from their parents develop Reactive Attachment Disorder, a condition characterized by “irritability, sadness, fearfulness and difficulty interacting with adults or peers.” These children are also at risk for developmental and physical delays.

To the argument that their parents are the ones to blame for the children’s distress, I'm taking a page from Attorney General Jeff Sessions and offering an Old Testament rebuttal in King Solomon’s wisdom. When faced with the choice between her child’s death or losing her child to another woman, the mother gave up her child, because a mother will always choose her child’s life. But no mother should have to make this kind of choice.

The British Somali refugee poet Warsan Shire puts it another way: “no one leaves home unless/home is the mouth of a shark/you only run for the border/when you see the whole city running as well…you only leave home/when home won’t let you stay.” (“Home”)

One final note: I know that you are a good mother to your children, and that on a personal level, this atrocity truly hurts your mother’s heart. Listen to the call of your heart. Mothers’ hearts know the truth about what children need. The Trump administration cited the Bible to justify their policy. But we both know that Jesus was very clear about the central moral imperative to care for children: “Whoever welcomes a little child like this in My name welcomes Me” (Matthew 18:5).

Who are we as Americans? Are we welcoming? Are we compassionate? Are we moral? Or do we only extend our welcome and compassion and morality to people who look like us?

If the choice is making America great for folks who “belong” here or choosing all of us, I choose all of us. We’re America. We can find room to welcome the strangers, as the Bible tells us to, and when we do, we’ll be truly great.

My friend, I understand that you are concerned about illegal immigration and asylum seekers. Like you, I do not believe that open borders are the right solution. But the current administration’s deplorable policy harms children, period. As Americans, we cannot support any policy that harms children. This is a bright line moral test, a Kantian categorical imperative. How we treat the most vulnerable in our midst will define our humanity. In this struggle, I’m siding not with “America First” but with “children first.”