How yoga keeps me sane and well 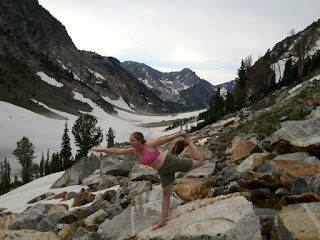 Almost one year ago today, a few weeks after losing a job I loved, I was standing in line at the grocery store when I got a call from my doctor. The results of a routine lab test were not good. I put down the milk, picked up a yoga mat, and headed to my first hot yoga class. Sixty days later, I emerged with a new body, and more importantly, a new mind.

Yoga saved me. The strength I found within myself on the mat, as I sweated and stretched and pushed myself past limits I thought I would never overcome, served me well in the coming months, as I faced challenges in my personal life that were also beyond what I thought I could handle.

That’s why I want to be a yoga teacher. When you find something that works, something that calms your mind, restores your spirit, energizes your body, you want to share that something with everyone you know. My surgery was successful. My job loss was temporary. The strength and poise and inner sense of peace I gained were far more valuable than what I lost.

Through the pain of loss, the universe gave me time to connect with myself. And yoga—which means union—was the instrument of that connection.

Today my son and I were featured in a Nova documentary on PBS with a truly awful title: “Mind of a Rampage Killer.” But the documentary itself, crafted by Miles O’Brien, told a compassionate and compelling story about families’ struggles with mental disorders. My son and I were honored and humbled to be a part of this critical conversation. We have learned firsthand the power of advocacy, of speaking out and sharing your story.

Mental health is an overwhelming problem for families everywhere. I think that yoga can be a part of managing this difficult illness.  The practice of yoga strengthens the body and mind. I want to share this path to strength and serenity with others, even as I continue to develop in my own practice.

Today I introduced Gabriel Azoulay to our BikYasa class at Hollywood Market Yoga in Boise. Gabriel has practiced yoga for 20 years. His favorite pose is full camel because it opens the heart (my own favorite is camel because it gets rid of the excrement, if you know what I mean). Gabe developed Bikyasa because he wanted to share his practice with others. He is a knowledgeable, passionate instructor, and I am really looking forward to learning more over the next few days.

Yoga teacher training is the reason vacation days exist. The next few days (minus a few mandatory faculty meetings and appointments with my son’s healthcare providers) are all about me. That’s not selfish—it’s self-care. If your family is struggling, or if you are caregiver, take time for yourself. Consider coming to the mat, to Child’s Pose.

Sometimes all we can control is our breath. And sometimes, the grace of that gift of breath is enough.
Posted by Anarchist Soccer Mom at 10:59 PM 20 comments:

From Anarchist to Advocate 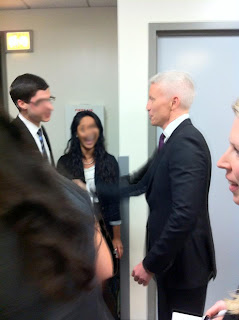 Learning from the pros on Anderson Cooper’s “Guns under Fire”


It’s a standing joke among my friends: before my blog post about my mentally ill son went viral, I did not know who Anderson Cooper was.

Let me explain this grave lapse of cultural literacy. After September 11, 2001, I sat in front of our television in slack-jawed horror, watching the towers fall over and over, for weeks. Then one day, I looked away from the TV and saw my four year-old son building a tower out of blocks and crashing his toy airplane into it.

So I gave up television. I didn’t actually mean to give it up completely—I’ve always been an early adopter and figured we would have the content on demand by 2003. My timeline was a few years premature. And by the time technology caught up, I was no longer interested in TV.

Now I get all my news from Facebook. It’s the perfect mix of local (kids, pets, vacations) and national, and since my friends are so clever, I trust them to pick the New York Times and Wall Street Journal and HuffPost articles I should read.  In that respect, Facebook has been a real timesaver for me. Okay, I’m not kidding anyone here. Facebook is a complete waste of time. But since I’m not watching “Jersey Shore” or “American Idol” or “Downton Abbey,” I feel okay about it.

Still, it’s become apparent that my Facebook friends aren’t quite clever enough. Because if they were, they would have been as agog over Anderson Cooper as the blurred-face woman in the picture above (she looked like a four year old girl about to meet a Disney Princess).

Cooper is the real deal—whip smart, funny, compassionate, able to shovel through the bullhorn bullshit that passes as public discourse these days and emerge with a squeaky clean smile.

When Anderson Cooper 360 decided to do a town hall meeting on guns, the producer, Kerry Rubin, called and asked me to talk about my experiences as a parent of a mentally ill son.

I couldn’t say no. And it was one of the most amazing and humbling experiences of my life.

I got to meet Amardeep Kaleka, a gun owner whose father was killed in a rampage at a Sikh temple in Wisconsin. Sarah McKinley, who made headlines when she defended her home and her baby against intruders. Tio Hardiman, who works with Chicago’s youth to try to change potentially destructive behaviors and save lives. And Veronique Pozner, who lost her sweet young son in the tragic Sandy Hook shootings.

Their stories all give nuance and complexity to a debate that too often looks like something drawn by toddlers with crude, bold crayons.

I also met Joshua Boston, the former Marine whose letter to Senator Diane Feinstein about her proposal to ban assault weapons also went viral. Josh is a passionate and articulate spokesperson for gun owners.

I shared a car on the way to the Town Hall with the inimitable Gayle Trotter, an activist, attorney, and mother of six who testified before the Senate Judiciary Committee about how guns actually make women safer. Gayle is as powerful an advocate for her Second Amendment rights as the Brady Campaign’s president Dan Gross (one of my oldest son’s heroes) is for gun control.

(In case you missed it, I’m not an anarchist—I’m a Libertarian. Not a big fan of laws, generally speaking. But also not a big fan of gun violence and school shootings.)

And I’m not a big fan of former NRA president Sandy Froman’s repeated use of the word “insane” on the program (at least she avoided “deranged” and “evil”). Every time she said it, I winced. Still, thanks to the First Amendment, Froman has every right to use that word, and while I wish she wouldn’t, I am not going to engage in ad hominem attacks (Dan Gross, on the other hand, was consistently respectful to people who suffer from mental disorders).

Highlights of the afternoon included meeting Cooper, Dr. Sanjay Gupta, Jeffrey Toobin, and watching Kerry Rubin in action—she’s like a conductor who takes raw notes on a score and turns them into a full orchestral suite.

In my own moment on camera, I got one good line in—“Why can’t we use our resources to make people less dangerous?” I don’t really remember the rest of what I said, just that Anderson Cooper’s eyes are really that blue.

In the end, Cooper couldn’t solve the gun problem in one town hall meeting. But he gave a hint at how to solve it when asked which team he favored in Sunday’s Super Bowl. Cooper responded with a grin, “Beyoncé.”

Sometimes when we can’t agree on something important (Ravens or 49’ers, for example), we have to look for something we can agree on. I am grateful to Anderson Cooper and his entire team for an impartial and thoughtful contribution to a vital conversation about guns and mental health, and for including me in that conversation.

It’s not easy to be an advocate, but sometimes our causes find us, even when we don’t expect them. I’m grateful for the opportunity to change a national conversation. Maybe it’s not about guns: maybe it’s about mental health.
Posted by Anarchist Soccer Mom at 8:39 PM 11 comments: